You are here: Home / ABOUT / THE WAR YEARS / Your King and Country Needs You? Walter Draycott’s 1915

Walter Draycott’s 1915 began in the freezing, mud-soaked trenches of the southern portion of the Ypres Salient, “men in trenches standing on their fallen dead comrades to avoid standing in the water which is thigh deep…Your King and Country needs you?” This all-important salient surrounding the ancient city of Ypres protruded into German-held territory and was a constant thorn in the side of the German military. As a result, the men stationed in the salient there were exposed to constant sniper fire and artillery bombardment as the Germans attempted to wear down those unlucky enough to occupy the trenches. Draycott, however, did his part in responding to the constant German threat; “I silenced two German snipers who were very troublesome…” His life during the first days of 1915 consisted of patrolling, rebuilding collapsed trenches, taking the odd shot at a German soldier unlucky enough to have his head above the trench, and finding ways to stay warm. The conditions he lived in were deplorable, “I am stationed in front of a dead Frenchman and on my left in the trench is the body of another one. There are four more higher up…” One evening the walls of Walter’s trench caved in and he and his comrades had to “work with our hands in the mud and throw it back again to build up the embankment.”

On the morning of January 8th in the midst of a “hellish bombardment”, Walter was struck by shrapnel from a German shell that sent tiny hot, sharp, metal splinters into his eye, face and chest. In horrible agony, Walter was evacuated first to Boulogne on the French coast, and then across the channel where he ended up in a makeshift hospital in the examination hall of Oxford University. Walter spent seven months in England, during which time he convalesced, visited with friends and family, including his two brothers, and kept up to speed on the reports from the front. Those back home would have heard about Walter’s wound through a report in the Vancouver Province Newspaper which, Walter noted, gave “a glowing account of myself [being] wounded.” 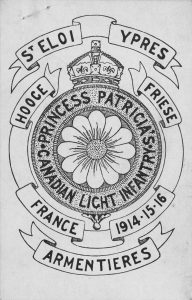 It was during his time in England that the first units of the Canadian Expeditionary Force began to arrive in France. In April of 1915 the First Canadian Infantry Division was stationed in the Ypres salient when the Germans finally launched a large-scale assault in what came to be known as the 2nd Battle of Ypres. This battle will forever be infamous because of the Germans’ use of poison gas for the first time on the Western Front. Slowly rolling clouds of chlorine gas settled in the deep pockets and crevasses of shell holes and trenches. Chaos erupted in the Canadian lines as soldiers desperately held out, blinded and even choking to death, against wave after wave of German infantry. . One Canadian medic, who had worked with chlorine in Canada, identified the gas and very quickly sent out word that the ammonia in urine could give some protection from its effects. Thus, all across the Canadian lines young men held urine-soaked handkerchiefs to their faces while fighting a desperate battle. Incredibly and against all odds the Canadians, who had only just arrived on the western front, were able to prevent a wholesale [or, full scale] collapse of the Ypres salient.

Walter’s regiment, it should be noted, was not part of the First Canadian Infantry Division but in fact part of the British 27th Division, also engaged in fierce fighting during the 2nd Battle of Ypres. Tragically, almost the entire regiment would be wiped out on the 8th and 9th of May defending their positions near Frezenberg, immortalized in WB Wollen’s painting “The Battle of Frezenberg.” Walter dejectedly wrote a few days later, “Tis rumored that the Princess Pats have been completely wiped out at Ypres…” Although a defensive victory, the 2nd Battle of Ypres gave Canadians their first real taste of the horrifically high death toll that would be a constant feature of First World War military operations.

By August of 1915 Walter was fit and healthy and returned to his completely rebuilt unit in France. In September his regiment was stationed along the right bank of the river Somme, approximately thirty-seven kilometers east of the city of Amiens. “Never in my life have I seen such a quantity (and so large being the marginal size of terriers) of rats. When lights were extinguished the rats swarmed over the troops. Sleep was impossible so a party of us went rat hunting.” Draycott’s regiment would spend the next couple of months rotating in and out of the front lines, “These trenches are only 25 to 50 yards away from the Germans so one has to be careful in the day time…We sniper and so do the Germans.” The danger was all too real for Draycott; on October 4th while shuffling through the trenches during a random German bombardment “a bullet passe[d] in front of my nose.” Luck was on his side that day. Not so for the German soldier Draycott spotted three days later, “Towards morning I noticed a German making towards his trench. I fired and down he went.”

And so the pattern continued for Walter and the men of the PPCLI. The constant back and forth of artillery, sniper and machine gun fire between them and the Germans, all the while contending with the wet and cold Autumn season and the army of rats living and thriving underfoot. Walter was appointed regimental barber and thus came to know many of the men in his unit. This sadly meant numerous notations in his diary of the death of those whose hair he had cut.

In late November the PPCLI returned to the Ypres salient to finally join their Canadian comrades, officially being designated a regiment of the First Canadian Infantry Division under General Edwin Alderson. The unit, ironically enough, returned to the portion of the Ypres salient only several kilometers from the village of Dikkebus, their original position in 1914. It was here that Walter contracted influenza and received another shrapnel wound in his hand. He also visited the graves of several of his fellow Princess Pats who had arrived with Walter back in 1914. War had truly consumed the environment that Walter Draycott now lived in. On one journey from Dikkebus to Ypres Draycott recounts, “Large shell holes cover the fields on either side, trees cut down by shells etc. Everywhere is ruin and desolation. Not a house habitable. Convent of St. Maria in ruins. Pass a pile of debris whereon is a cross with words ‘Under this debris are the bodies of 6 men.’ We see the Church of St. Nicholas with roof completely off.” For Walter, 1915 ended much the same way it began, huddled in a trench, wet and cold, struggling against the elements, warring against the rats and fighting against the Germans.

This site is best viewed with the most recent version of all major web browsers.